We may earn money or products from the companies mentioned in this post. This is at no additional cost to you and we only recommend products we love. Contents hide
1 What can I use as a grain free flour substitute?
1.1 Which flour substitute should I choose?
2 Nut and Seed Flours
2.1 These are generally considered Paleo friendly and can be used in low carb/keto recipes as well
3 Gluten Free Grain Like Pseudocereals
3.1 These are actually seeds that act like grains – some people are fine with these but for others they will still cause issues.
4 Grain Free Starchy Flours
4.1 These are higher in carbohydrates so would be avoided if you are trying to keep carbs down
5 Legume Based Flours
5.1 These can be used if you are not sensitive to legumes – but are not considered Paleo

What can I use as a grain free flour substitute?

When you first go grain free it can be a real challenge to figure out what you can use to replace traditional flour in cooking.

There are a number of substitutes though none are a true swap for regular wheat flour. You will find thousands of recipes online for gluten, grain free, low-carb and keto baking, most of which will use a blend of substitutes to try to replace flour.

Going grain free you just have to accept that with baking especially, things will just have a different texture – but can still be delicious! 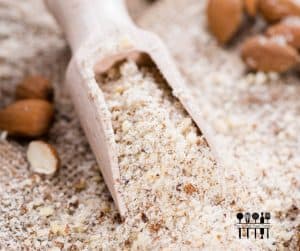 Which flour substitute should I choose?

Which flour substitutes you choose will depend on a number of things – what kind of texture you are after, sweet or savory, and probably most importantly why you are avoiding grains.

You may just be avoiding gluten, you may be avoiding all grains and pseudo grains due to auto-immune or gut issues, you may have nut/seed allergies or you may be following a keto or low-carb diet. All of these things will impact your choice in which substitutes you want to use.

If you like to save money then you can buy nuts and seeds in bulk and mill your own nut and seed flours from raw ingredients with a high speed blender or you can purchase the finished products. 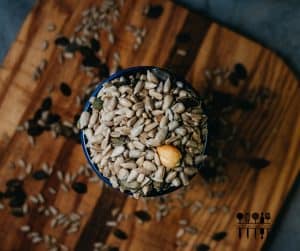 Almond Flour or almond meal is made from finely grinding sweet almonds. Almond meal generally still has the skin of the almond incorporated in the grind while almond flour is made from grinding blanched almonds.

Almond flour is widely used in baking and is popular in Paleo and Keto cooking.

Hazelnut Flour is made from finely grinding roasted hazelnuts. It’s low in carbohydrates and can be used like almond meal. It is generally used in conjunction with other nut flours as it is on the more expensive side.

Sunflower Seed Flour is a good nut-free alternative to almond flour. It is also extremely easy to grind your own and is inexpensive as well. Sunflower flour can turn your baked goods green due to the reaction between chlorogenic acid and baking soda/powder. Make sure you incorporate the baking agent thoroughly to help avoid this.

Pepita (Pumpkin Seed) Flour – another nut-free alternative that is super simple to grind on your own. Seed flours are best ground just before you need them as the oils in them can oxidise quickly.

Hemp Powder/Flour – Hemp flour is a natural source of omega fatty acids, dietary fibre, vitamins and minerals. This flour has a subtle, fresh aroma with a light nutty flavour. Hemp flour is a delicious and healthy addition to sweet or savoury dishes.

Chia Flour – Chia is high in protein and omega fatty acids. Chia powder/flour can be used to help thicken recipes and as a great protein boost.

Sesame Flour – Made from protein-rich sesame seeds, this flour is a naturally gluten-free, low fat, and low carb substitute. Sesame flour has a hefty amount of iron, zinc, and magnesium, and is rich in fiber. Since it has a slightly nutty taste, this flour is suggested for use in cakes, breads, and biscuits.

Coconut Flour – Coconut flour is a soft, naturally grain- and gluten-free flour produced from dried coconut meat. It is a natural byproduct of coconut milk production. When producers press coconut for its milk, bits of coconut meat remains. This is dried and then ground to make the flour.

Chestnut Flour – chestnut flour is a great, gluten-free alternative to wheat-based flour. Add it to baked goods and pancakes, or stir into casseroles for a thick, nutty sauce. Make your own chestnut flour by dry roasting the nut, removing the skin, then blending to a fine consistency.

Flaxseed Meal – Flaxseed is a great super food to add to your diet. It contains 71% of fat from healthy omega-3 fatty acids. Plus, it has only 3 g net carbs per 100 g has 46% of the carbs in flaxseed are non-digestible fiber. You can purchase flax meal already ground but I prefer to grind it myself from whole flax since it has such a high fat content it can oxidize quickly and go rancid once it’s ground.

Ground Psyllium – Ground psyllium husk powder is 100% pulverized psyllium husk shells and is used to give a bread-like texture to what you’re baking.

These are actually seeds that act like grains – some people are fine with these but for others they will still cause issues.

Amaranth– When you add amaranth in amounts up to 25 percent of the total flour used in gluten-free recipes, you not only improve the nutritional value but also the taste and texture of gluten-free baked goods. Additionally, amaranth is an exceptional thickener for roux, white sauces, soups, and stews.

Buckwheat – You can generally swap 25% of the wheat flour with buckwheat flour (by weight or volume) in cookies, muffins, scones, or biscuits, and even cakes and quick bread, and crackers, without a problem.

th other gluten-free flours, such as gluten-free oat flour and sweet rice flour or tapioca flour, it creates a versatile all-purpose-like blend.

Quinoa – Quinoa is high in protein, calcium and iron. Use this delicate flour when baking. You can substitute this flour for 1/2 of the all-purpose flour in many recipes or completely replace wheat flour in cakes and cookie recipes. I will say however that I personally know several people including myself who cannot tolerate Quinoa, it can be an allergen.

Cassava Root Flour (Manioc) – It’s not grainy or gritty in texture – rather, it’s soft and powdery. These qualities, along with the fact that it can be replaced on a 1:1 basis with wheat flour in many recipes, make cassava flour a preferred flour for gluten-free, grain-free baking and cooking. It’s also a great nut-free flour.

Tapioca Flour – Tapioca flour is a very fine, white powder that works well in gluten free baking. It can replace cornstarch as a thickener for pies and sauces and aids in creating a crisp crust and chewy texture in baking.

Tiger Nut Flour – Tiger nut flour is similar to almond flour. It’s slightly nutty tasting, and has a nutty texture. It is not actually a nut but rather a root so is nut free as well.

Mesquite Powder – The red flour which is used in cooking is obtained by grinding the plant’s seeds, contained in a pod similar to that of the peas or carob. Not only does the special flour have a characteristic flavour and unmistakeable aroma it also has extraordinary nutritional properties.

Potato Starch – Similar to other starches, it is commonly used to thicken, gel, texturize and increase crispiness in baked goods. Sago starch – Sago starch can be used to make bread, pancakes and biscuits.

Taro flour – The root is rich in dietary fiber and minerals like potassium, and, in powdered form, it’s a nutritious alternative to wheat flour.

Yam (iyan) flour – Yam flour is powdered starch widely used in food preparation. Typically white, the flour is commonly used in African dishes, such as Amala. It may be used in many other recipes if desired as well. It is prepared by grinding dried yams until they reach a powdered consistency.

Sweet Potato Flour – Sweet potato flour is incredibly versatile and can be used for baked goods, such as breads, cookies, muffins, pancakes and crepes, cakes, and doughnuts. It can also be used in soups, as a thickener for sauces and gravies, and in breading for fish. It is raw flour and does not require cooking before use.

Plantain Flour – Green plantain flour can be used as a direct substitute for conventional flour. See Green Banana Flour above. Urad Dal Flour – made from lentils.

Soy Flour – Soy flour is a good substitute for 10 to 30 percent of the wheat flour in sweet and rich baked goods, such as cookies, soft yeast breads and quick breads.

Chickpea Flour – made from garbanzo or chickpeas it is similar to fava bean flour.

Is Bread Really That Bad for You? I'm Tammy, Mother of 5 and wife of 1. The Grain Free Pantry is a resource hub for those who are living a grain free life. You'll find recipes, products and tips that help make living without grains easier and more convenient.